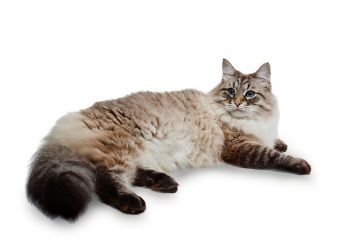 The Siberian, Russia’s native forest cat, first appeared in recorded history around the year 1000 and hails from the unforgiving climate of Siberia. This is a cat that nature designed to survive, with no extremes in type. The Siberian is a medium to medium large, strong triple-coated cat with surprising heft for its size. The overall appearance should be one of strength, presence, and alertness, with a sweet facial expression. The breed is extremely slow to mature taking as long as 5 years.

Siberians are affectionate cats with a good dose of personality and playfulness. They are amenable to handling, and it is noted that Siberians have a fascination with water, often dropping toys into their water dishes or investigating bathtubs before they’re dry. Siberians seem very intelligent, with the ability to problem-solve to get what they want.

Despite their size, they are very agile and are great jumpers, able to leap tall bookcases in a single bound. Siberians are very people-oriented, and need to be near their owners. They’ll meet you at the door when you come home and tell you about their day, and want to hear about yours.

Siberians are talkative but not nearly as chatty as Oriental breeds; they express themselves using quiet meows, trills, chirps, and lots of motorboat-type purring. They like sitting on your lap while they’re being groomed, an activity they particularly enjoy. Another favorite game is bringing a toy for you to throw again and again— and again. They love all types of toys— and will make a toy out of just about anything. Nature shows on TV with chirping birds or squeaking mice will bring your Siberians running; they’ll put gentle feet on the screen and try to catch the fluttering images.

This breed may be new to North America, but it’s far from new to the world. Longhaired Russian cats have been around for many hundreds of years. Exactly when and how longhaired cats made their way to Siberia is not known, but it is speculated that the breed arrived with Russian emigrants. According to some Siberian fanciers, Russians immigrating (or being exiled) to Siberia brought their cats with them. The mutation for long hair seems to have occurred in three separate areas—Russia, Persia (Iran), and Asia Minor (Turkey). However, it’s possible that the longhair mutation originally occurred in Russia and that Russian Longhairs spread from Russia into Turkey, crossbreeding with local cats to become the Angora, and into Persia, crossbreeding with local cats to become the Persian. If so, all longhairs are derived from the Russian Longhair.

Long fur in domestic cats appears to be an adaptation to cold, and it’s certainly cold in Siberia. Due to the merciless climate, these cats developed, or acquired through mating with the local cats, longer hair, all-weather coats, and larger, stockier bodies. The cats survived and developed into a hardy, longhaired breed able to withstand the unforgiving conditions of the region.

According to Russian stories, Siberian cats once weighed up to 45 pounds and protected their human companions and households. In Harrison Weir’s 1889 book, Our Cats and All About Them, he noted in the chapter on longhaired cats the varieties of longhaired cats that existed in his time, and were shown in his famous modern cat show in July 1871 at the Crystal Palace in London, were the Russian, Angora, Persian, and Indian. Weir, known as “the Father of the Cat Fancy,” wrote that the Russian Longhair differs from Angoras and Persians in a number of ways, including its larger size, longer mane, large prominent bright orange eyes, and its long, dense, woolly textured coat including the tail that’s thickly covered with very woolly hair. However, the Russian longhairs who shared the limelight at the show may or may not have been Siberians, since apparently no records of these cats were kept in Russia at that time.

Until the 1980s, the government of the former Soviet Union discouraged its citizens from owning household pets because of housing and food shortages. In 1987, the government lifted restrictions on house pets, and breeders and fanciers formed cat clubs and began keeping breeding records. In 1988, the first Russian cat show was held in Moscow. Terrell sent four Himalayans to Nelli Sachuk and in exchange received three Siberians on June 28, 1990—one male (Kaliostro Vasenjkovich) and two females (Ofelia Romanova and Naina Romanova). Soon after, she received the kittens’ metrukas (certificates of birth), which detailed their names, dates of birth, and colors and patterns. Before long, the Siberian had captivated Terrell’s heartstrings and purse strings. She invested thousands of dollars and expended many hours obtaining more cats and establishing the Siberian as a recognized breed in America. Just a month after Elizabeth Terrell received her Siberians, breeder David Boehm imported a number of Siberians of his own. Instead of waiting for cats to be sent, he booked a flight to Russia and bought every Siberian he could find. On July 4 he returned with a collection of fifteen cats. His Siberians produced the first litter in North America, and were invaluable in enlarging the Siberian gene pool.

Body is medium in length, and well-muscled with the back arched slightly higher than the shoulders, with a barrel-shaped, firm belly giving the sensation of solid weight. Moderate stomach pad or famine pouch on lower abdomen acceptable. Boning substantial. Musculature substantial, powerful.

Modified wedge of medium/large size with rounded contours, in good proportion to the body. The head is broader at the top of the skull and narrows slightly to a full-rounded muzzle. The cheekbones are neither high set nor prominent. There should be a slight doming between the ears and an almost flat area on the forehead. Chin is well-rounded but not protruding, and is in line with the nose.

Muzzle is moderately short in length, full and rounded. There is a slight muzzle curvature, but the transition between the side of the head and the muzzle is gentle and inconspicuous. Top of the head is almost flat, with a slight nose curvature of a gentle slope from the forehead to the nose and a slight concave curvature before the tip when viewed in profile. Neck rounded, sturdy, and well-muscled.

Medium-large, rounded, wide at the base, and tilt slightly forward. The ears should be set as much on the sides of the head as on top. The hair over the back of the ear is short and thin. From the middle of the ear, the furnishings become longer and cover the base of the ear. Ear tipping is allowed.

Medium to large, almost round. The outer corner angled slightly towards the base of the ear. The eyes should be set more than one eye’s width apart and should be open, alert, and expressive. There is no relationship between eye color and coat/color pattern except in the color points which have blue eyes. Eye color should be shades of green, gold, green-gold, or copper. White cats and cats with white may have blue or odd eyes.

Legs medium in length. The legs should have substantial boning with the hind legs slightly longer than the front legs. Feet are big and rounded, with toe tufts desirable.

Medium in length, being somewhat shorter than the length of the body. It should be wide at the base, tapering slightly to a blunt tip without thickening or kinks, evenly and thickly furnished.

Moderately long to longhaired cat with a triple coat. The hair on the shoulder blades and lower part of the chest should be thick and slightly shorter. Abundant full collar ruff setting off the head in adults. Allow for warm weather coats. The hair may thicken to curls on the belly and britches, but a wavy coat is not characteristic. Texture varies from coarse to soft, varying according to color. There is a tight undercoat (in mature cats), thicker in cold weather.

All colors and combinations are accepted with or without white. White is allowed in any amount and in all areas. White or off-white allowed on chin, breast, and stomach of tabbies. Buttons, spots, and lockets are allowed. Strong colors and clear patterns are desirable. Tarnishing on silvers not penalized.