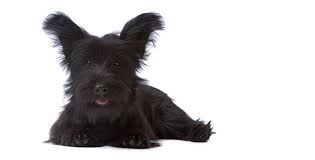 The Skye Terrier is a stylish and elegant dog. They are solidly built, with substantial bone, and twice as long as they are tall. The Skye Terrier often has short legs and a long back. Their movement is free and effortless. Their hard outer coat and close undercoat can help provide some protection from inclement weather. Their outer coat lies straight and flat, 5.5 inches or more in length. Their hair often covers their forehead and eyes.

Scotland has long been a stronghold of small plucky terriers, and the Skye Terrier is among the oldest of them. They developed along the west coastal area, where they hunted from the rocky cairns. The origin of these dogs was on the Isle of Skye, and the dogs were thus dubbed Skye Terriers.

They were first described in the sixteenth century, when they were already noteworthy for their long coat. Some confusion exists in tracing their history because, for a time, several different breeds were grouped under the name Skye Terrier. The true Skye Terrier became prominent in 1840 when Queen Victoria enjoyed the breed, keeping both drop- and prick-eared dogs. This enhanced their popularity both in high society and among commoners, and the Skye soon came to America. The AKC recognized the breed in 1887.

Despite the breed’s distinctive appearance, their popularity has waned, and they are now among the least known terriers. The most famous Skye of all time was Greyfriar’s Bobby, who slept on Greyfriar’s grave for 14 years until his own death; he continues his vigil still, having been buried along side him. A statue commemorates this most loyal of dogs.

The Skye Terrier’s soft look belies their tough nature. They are a mild-mannered member of the family, one of the few terriers calm enough to live in the city. They still need daily exercise and a walk however. They can be sensitive yet stubborn. The Skye is affectionate with their family but cautious with strangers. They tend to get along fairly well with other dogs in the same household but may not mingle well with strange dogs. They are extremely courageous and can make a good watchdog in the home, detecting strangers or visitors and barking in response.

These dogs enjoy a daily outing, exploring in a safe area, such as a fenced yard. They also need a short to moderate walk to stay in shape. Regular combing (about twice a week) is all that is needed to keep the Skye looking good. An occasional bath will not soften their coat too much, as is often the case with other terriers. The hair around their eyes and mouth may need extra cleaning.