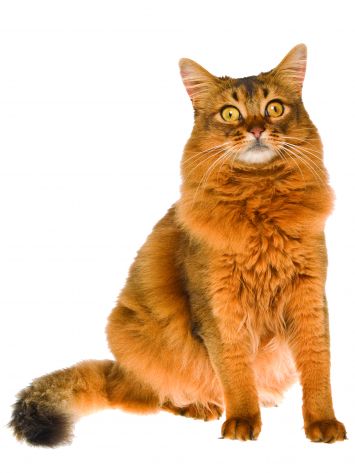 The overall impression of the Somali is that of a well-proportioned medium to large cat, firm muscular development, lithe, showing an alert, lively interest in all surroundings, with an even disposition and easy to handle. The cat is to give the appearance of activity, sound health, and general vigor.

Don’t get a Somali if you want a cat that can be taken for a furry doorstop, or if you want a cat that’s just going to lie around the house all day. With all the virtues of the Abyssinian and adorned by a gorgeous semi-long coat, the Somali is a beautiful and boisterous addition to any household.

Like the Abyssinian, the Somali is vigorous and animated, has a keen sense of feline humor, and a real need for play. Everything is a game to a Somali; some will play fetch, but many prefer to chase that ball down the hall and then bat it up and down, around and around, until it rolls back to your feet for you to throw again—and again. If it rolls under something from which they can’t retrieve it, then back they’ll come and give you a wide-eyed stare or a gentle tap so you’ll get up and put the ball back in play. Wands and fishing poles with feathers are a huge hit; you’ll need a lockable cupboard for when playtime is over.

Fanciers say the Somali shares more than just a passing resemblance to the wily fox; Somalis know more ways to get into adorable mischief than a barrel of foxes. How adorable you find their mischief often depends upon the hour—it’s less adorable when you’re jolted awake at 4:00 a.m. by the loud crash of a breakable knickknack hitting the floor. They are highly intelligent, which contributes to their talent for mischievous amusement. The Somali is active, curious, and high-spirited, and loves to prance around the house, opening cupboards and generally getting into trouble.

Their voices are soft, their minds active, and their food dishes always empty. They also tend to be determined cats; once they get an idea in their furry little heads, there’s no dissuading them. They’re not belligerent about that idea rolling around between their ears; they’re just tenacious. Somalis are people-oriented and affectionate, but are not lap cats. They don’t like to be cuddled and when picked up usually are all wiggles until you relent and put them down. When you’re relaxing on the couch, they prefer to be near rather than on you. They do, however, want to be involved in every aspect of your life. Open a drawer and your Somali will be there to peer in, and stick a curious paw inside, too. Somalis are the best home entertainment you can buy, and they are more like people than cats— small, hairy, hyperactive people. Very energetic and high spirited, Somalis cavort like kittens until well into old age.

No one knows for sure when and where the first Somali appeared; some proponents think that the long coat was a spontaneous natural mutation in the Abyssinian. Genetic studies indicate, however, that the Somali probably originated around the turn of the century in England when breeders, low on breeding stock, used longhaired cats in their Abyssinian breeding programs.

In the late 1910s and in the late 1940s, during the aftermath of World Wars I and II, when so many breeds had dwindled to near extinction, breeders were forced to mix other breeds into their Abyssinian bloodlines to keep the breed going. Raby Chuffa of Selene, a male Abyssinian that came to the United States from Britain in 1953, and that appears on the pedigrees of many Abyssinians, is considered the father of the Somali breed on this continent; all Canadian and American Somalis can be traced back to this cat.

Raby Chuffa’s pedigree can be traced back to Roverdale Purrkins, an English Abyssinian female whose dam, Mrs. Mews, was of unknown ancestry and probably carried the longhair gene. Mrs. Mews was given to breeder Janet Robertson by a sailor during WWII. Mrs. Mews later produced two kittens: Roverdale Purrkins, registered as an Abyssinian, and a black unregistered male. Robertson used Purrkins to start her Roverdale cattery. Her cats and other Abyssinians of British origin were exported to Europe, Australia, New Zealand, Canada, and the United States. When longhaired kittens cropped up in Abyssinian litters (possible whenever two Abyssinians carrying the recessive gene for long hair were bred together), the kittens were quietly given away, since no breeder wanted to be thought to have Abyssinian lines that were “tainted” with the longhair gene. It wasn’t until the 1960s that breeders, seeing the appeal of a longhaired version of a breed that was rapidly gaining popularity in North America, began seriously trying to turn these castaways into a breed of their own. At the same time, breeders in Canada, Europe, Australia, and New Zealand began working with the new breed as well. Some Abyssinian breeders wanted nothing to do with these longhaired nonconformists and did not want to encourage the connection that the name “Longhaired Abyssinian” would produce.

Abyssinian breeder Evelyn Mague, one of the first U.S. breeders to work with the longhaired breed after finding two of her Abyssinians, Lynn-Lee’s Lord Dublin and Lo-Mi-R’s Trill-By, carried the longhair gene. She came up with the name “Somali” because Somalia borders Ethiopia, the country formerly called Abyssinia for which the Abyssinian was named. In 1972, Mague founded the Somali Cat Club of America and began bringing the Somali enthusiasts together. In 1975, the CFA-affiliated International Somali Cat Club was founded, and in 1979, the Somali earned championship status in the CFA.

Torso medium long, lithe, and graceful, showing well-developed muscular strength. Rib cage is rounded; back is slightly arched giving the appearance of a cat about to spring; flank level with no tuck up. Conformation strikes a medium between the extremes of cobby and svelte lengthy types.

Modified, slightly rounded wedge without flat planes; the brow, cheek, and profile lines all showing a gentle contour. A slight rise from the bridge of the nose to the forehead, which should be of good size with width between the ears flowing into the arched neck without a break. Muzzle shall follow gentle contours in conformity with the skull, as viewed from the front profile. Chin shall be full, neither undershot nor overshot, having a rounded appearance. The muzzle shall not be sharply pointed, and there shall be no evidence of snippiness, foxiness, or whisker pinch.

Large, alert, moderately pointed, broad, and cupped at the base. Ear set on a line towards the rear of the skull. The inner ear shall have horizontal tufts that reach nearly to the other side of the ear; tufts desirable.

Almond shaped, large, brilliant, and expressive. Skull aperture neither round nor oriental. Eyes accented by dark lid skin encircled by light colored area. Above each a short dark vertical pencil stroke with a dark pencil line continuing from the upper lid towards the ear. Eye color gold or green, the more richness and depth of color the better.

Legs in proportion to torso; feet oval and compact. When standing, the Somali gives the impression of being nimble and quick. Toes five in front and four in back.

Having a full brush, thick at the base, and slightly tapering. Length in balance with torso.

Texture very soft to the touch, extremely fine and double coated. The more dense the coat, the better. Length: a medium- length coat, except over shoulders, where a slightly shorter length is permitted.

Ruddy, red, blue, and fawn. Warm and glowing. Ticking: distinct and even, with dark colored bands contrasting with lighter colored bands on the hair shafts. Undercoat color clear and bright to the skin. Deeper color shades desired, however, intensity of ticking not to be sacrificed for depth of color. Preference given to cats unmarked on the undersides, chest, and legs; tail without rings. Markings: darker shading along spine continuing through tip of tail; darker shading up the hocks, shading allowed at the point of the elbow; dark lines extending from eyes and brows, cheekbone shading, dots and shading on whisker pads are desirable enhancements, eyes accentuated by fine dark line, encircled by light-colored area.