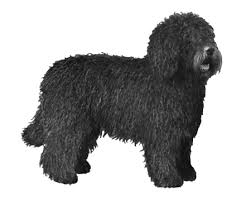 The Spanish Water Dog is a sturdy, medium-sized athlete. They are solidly built and are slightly longer than tall. Their coat is a single coat with distinctly curly hair with wooly texture, adapted to the variable humidity and drought conditions of their homeland. Their coat is usually not brushed but allowed to form curls or cords that cover the entire body, including their head. Their movement is effortless and ground covering, with good reach and drive.

The early history of the Spanish Water Dog is largely speculative, with various theories having their ancestors arising in North Africa, Turkey, Hungary, and even Spain. By 1100 a.d., there are clear references to these dogs in literature. They were used for different tasks in different parts of the Iberian Peninsula. In the northern coastal regions and fishing ports they were all-purpose water dogs, jumping in the water to retrieve fishing tackle, nets, and mooring lines. They may have also been used as hunting dogs. In the central and southern regions they herded and protected sheep, goats, and cattle, and again, perhaps hunted small animals.

The Industrial Revolution in Spain gradually drove many dogs out of work, with some jobs being taken over by mechanized means and by destroying coastal fishing areas from pollution. Some dogs remained working as herders, and in 1975 two people began an effort to revive the breed. They gathered dogs from all regions, but they mostly gathered Andalucian herding dogs. By 1980 a Spanish Water Dog club was established in Spain, and in 1985 the Spanish Kennel Club recognized the breed. In the United States, the AKC recognized them in 2015. They are an incredibly versatile breed and sometimes participate as search and rescue dogs and as drug detection dogs.

This high-energy breed often likes activity and challenges. They are intelligent and have a  desire to please, and are thus often highly trainable.  They can be very affectionate and like to constantly be with their family. They generally get along well with other dogs and pets but can be naturally suspicious of strangers. The Spanish Water Dog can be protective of their home and family. Like many herding dogs, Spanish Water Dogs can herd children and can be overly sensitive to sudden stimuli. In the home they are likely to be alert dogs, detecting strangers or visitors and bark in response.

The Spanish Water Dog needs daily mental and physical challenges that can be met with a long walk, jog, or vigorous games, plus activities like agility. Given adequate exercise, they are usually a calm member of the household. The Spanish Water Dog has a non-shedding coat that, over time, tends to form cords. They shouldn’t be brushed, and when bathed they should be blotted, not rubbed, dry. The Spanish Water Dog was traditionally sheared once per year, along with the sheep, but now their coat is maintained between one and five inches in length.