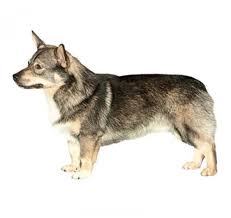 The Swedish Vallhund is low to the ground (height to length of body is 2:3). They are longer legged, shorter bodied, and less stocky compared to Corgis, giving them slightly more speed and agility. Their teeth can be large for their skull. Their medium-length coat is double, with coarse guard hairs and an insulating undercoat. Their tails vary in length.

The Swedish Vallhund, sometimes referred to as “the little Viking dog,” is a dwarf spitz breed that has been used as a farm dog for centuries, possibly since Viking times, when they were known as the Vikingarnas Dog. They herded cattle, protected the home and farm from rodents, and acted as a watchdog.

Very little is known of this breed’s early history. By 1942, they were almost extinct. Count Bjorn Von Rosen and Karl Gustav Zettersten, began an effort to save the breed, locating one male (named Mopsen) and three females (named Vivi, Lessi, and Topsy), which they hoped would revive the breed.

They were recognized by the Swedish Kennel Club as the Svensk Vallhund, which translates to Swedish herder. The name was changed in 1964 to Västgötaspets, named after the Swedish province Vastergotland where this breed was revived. The first Vallhunds came to England in 1974, then to the United States from England in 1983. They entered the AKC Herding Group in 2007, but have remained mostly unknown to the general public. The breed is often known for their hardiness and health.

The Swedish Vallhund is a confident dog that doesn’t let their short stature hold them back. They are often energetic and playful when circumstances allow, but calm and mellow when they need be. They can learn quickly and can be eager to please, but have a streak of independence. They often enjoy mental challenges and can be sometimes too inquisitive. They are sweet but not fawning. They usually get along well with other dogs and animals. They tend to be good with considerate children, but can nip heels in play. They may be wary of strangers. They can tend to bark enthusiastically and will detect strangers or visitors and alert their family.

Swedish Vallhunds need a medium to high level of activity. A long walk or short jog, along with a mentally challenging game, will usually satisfy their exercise needs. They also enjoy agility. Their coat care consists of weekly brushing. They may enjoy cooler weather but can enjoy warmer weather as well.