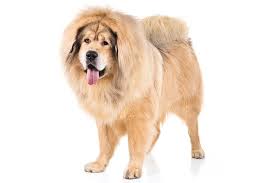 A powerful, heavy, but athletic dog, the Tibetan Mastiff is built to combine strength and agility. Their body is slightly longer than they are tall. Their walk is slow and deliberate, while its trot is powerful and light-footed. Their whole appearance is impressive, with a solemn but kindly expression. Their coat, which is noticeably heavier in males than in females, is thick and fairly long, especially around the neck and shoulders. Their tail is densely coated and the hind legs feathered on the upper parts. Their hair is coarse, straight, and hard, standing off from the body. They carry a heavy undercoat in cold weather but little undercoat in warm weather. This combination of coat types allowed the Tibetan Mastiff to endure the extremes of Tibetan weather.

Among the most ancient and influential of breeds, the Tibetan Mastiff’s origins have long been lost. Archaeological evidence of massive dogs dating to 1100 b.c. can be found in China; such dogs may have traveled with Attila the Hun and Genghis Khan, providing the origins for mastiffs in Central Asia. Those on the Himalayan plateaus developed into camp guardians of nomadic herdsmen. Their nomadic lifestyle furthered their distribution, but the high mountains separating plateaus and valleys created isolated populations. Thus, a wide range of dogs emerged, with hardiness and guarding ability guiding selection.

Besides protecting the campsites, dogs were used to protect villages and monasteries. The breed remained largely unknown outside their native Tibet until 1847, when the Viceroy of India sent a large dog from Tibet named Siring to Queen Victoria; they gained greater exposure when two dogs imported by the Prince of Wales in 1874.

With few dogs outside their native country, the breed’s future was threatened when China invaded Tibet in the 1950s, displacing the native dogs. Survival depended on fleeing to neighboring countries or retreating to isolated mountain villages. The Dalai Lama sent two dogs to President Eisenhower, but they soon disappeared into obscurity. Only in the 1970s did dogs from Nepal and India arrive in America. These dogs came from a wide genetic base, accounting for the natural variation in size and style in the breed today.

As befitting their long past as a solitary sentry, Tibetan Mastiffs are oftentimes independent and strong willed. They can be aloof toward strangers but devoted to their family. Proper socialization is essential so that they will accept strangers and not become overly suspicious. They are gentle and patient with their children, but may assertive with those outside of the family. They are generally good with other dogs. Most Tibetan Mastiffs are good with other animals.

The Tibetan Mastiff tends to be calm indoors and moderately active outside. A long daily leash walk along with access to a fenced, outdoor yard should meet their needs. Grooming typically consists of brushing a few times a week (daily during shedding), paying special attention to the longer hair. They often enjoy cooler temperatures and are not suited for hot, humid weather. They like to bark loudly at night.