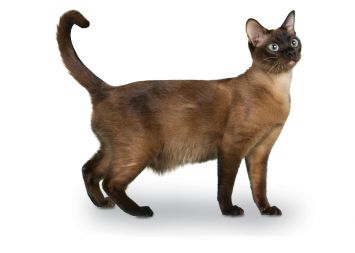 The Tonkinese is an alert, active cat with good muscular development. Tonkinese cats are very personable and are known for their good temperament and loyal companionship.

The Tonkinese has a winsome personality, not surprising since the Burmese and Siamese are prized for their temperaments. Faithful followers say the Tonkinese has the best of both breeds. Its voice is milder in tone than the Siamese; however, it does believe in feline free speech and wants to share all of the day’s adventures with you when you come home in the evening.

The Tonkinese craves, and returns, affection and companionship. Unlike the rest of your busy family, this cat will always join you for dinner. Tonks have an unflagging enthusiasm for life and life’s pleasures, and love interactive toys, such as human fingers and the tails of its cat companions. It makes every close encounter a game.

While Tonkinese cats willingly adapt to humans and animals alike, they may annoy more laid back pets and therefore might do better in a household with pets of a similar activity level.

While planned breeding of the Tonkinese didn’t begin until the 1960s, early versions of the breed in all probability have been around for hundreds of years. Since Burmese cats, originally called “copper cats” in their native land of Southeast Asia, existed in the same regions as the Siamese for centuries, planned or unintentional crosses seem likely. Solid brown (self-brown) cats and chocolate Siamese were among the first felines to come to England from Siam in the late 1800s, along with the blue-eyed sealpoint Siamese.

Early records describe the brown-colored cats as “Siamese, with coats of burnished chestnut, and greeny-blue eyes.” Researchers believe that these imports were not all of the same genetic types, but rather represent what today would be called Burmese, chocolate point Siamese, Tonkinese, and Havana Browns. At this point, it’s hard to tell one from another from the available descriptions. Ironically, Wong Mau, the Burmese’s foundation cat brought to the United States in 1930, was found to be a Siamese/Burmese hybrid and today would be considered a Tonkinese. These Siamese and solid-colored cats were exhibited in Europe during the late 1800s and the early 1900s. Soon after, however, such cats fell from grace. In 1930, the Siamese Cat Club announced, “The club much regrets it is unable to encourage the breeding of any but blue-eyed Siamese.” Solid-colored cats lacking blue eyes were accordingly banned from competition and disappeared from the cat fancy.

The Tonkinese got a fresh start as a recognized breed in the early 1960s, when Canadian breeder Margaret Conroy crossed a sable Burmese with a sealpoint Siamese. The product of the cross was a cat of intermediate temperament and type, which Conroy originally called the “Golden Siamese.” When the Tonkinese began, both the Burmese and the Siamese had not yet been transformed by selective breeding into their current conformations. The Siamese had yet to attain its extremely sleek show style, and the Burmese was not yet as compact and cobby, nor the head shape as broad and rounded. Still, combining the two and achieving a uniform and consistent head and body type was challenging for Tonkinese breeders.

In collaboration with other notable breeders like Jane Barletta of New Jersey, Conroy wrote the first breed standard, which was presented to the Canadian Cat Association (CCA). The Tonkinese was the first breed to be developed in Canada. In 1971, CCA became the first cat registry to grant championship status to the Tonkinese. CFF recognized the Tonkinese in 1974; TICA followed in 1979, the year they formed as an association.

In October 1979, the CFA passed a “five-year rule,” requiring new breeds to remain in the newly established non-competition miscellaneous class for five years. The CFA granted the Tonkinese breed championship status in 1984. By 1990, all of the major associations had accepted the breed for championship.

Torso medium in length, demonstrating well-developed muscular strength without coarseness. The Tonkinese conformation strikes a midpoint between the extremes of long, svelte body types and cobby, compact body types. Balance and proportion are more important than size alone. The abdomen should be taut, well-muscled, and firm.

Alert, medium in size. Oval tips, broad at the base. Ears set as much on the sides of the head as on the top. Hair on the ears very short and close-lying.

Open almond shape. Slanted along the cheekbones toward the outer edge of the ear. Eyes are proportionate in size to the face.

Fairly slim legs, proportionate in length and bone to the body. Hind legs slightly longer than front. Paws more oval than round. Trim. Toes: five in front and four behind.

Proportionate in length to body. Tapering.

Medium short in length, close-lying, fine, soft and silky, with a lustrous sheen.

Natural, champagne, blue, and platinum in solid, point, and mink patterns. With the dilute colors in particular, development of full body color may take up to 16 months. Cats do darken with age.