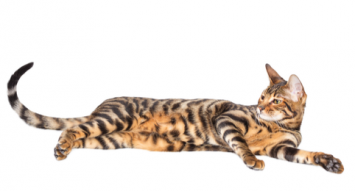 With majestic looks fitting for a tiger, the Toyger is a medium-sized, muscular cat with a long, rectangular body, substantial boning, high shoulders and inverted heart-shaped face. Her powerful body type lends itself to the slinky, rolling stride of a wild cat, demanding your attention. With a coat pattern that’s uniquely hers, the Toyger has circular facial markings and dark vertical stripes patterned against her shiny, plush, vivid orange coat.

Friendly, playful and outgoing, the spirited Toyger basks in being near her people and also gets along well with children and other pets. Her easygoing personality suits the Toyger well as a family companion, while her supreme intelligence makes her easy to train.

There have been plenty of domestic cats resembling tigers throughout history, but when breeder Judy Sugden developed the Toyger, a true replica of the majestic jungle cat was born. In the late 1980s, Sugden observed that one of her cats, “Millwood Sharp Shooter,” had a couple of tabby spots on the temple and sought to develop a new breed of cat with the circular head pattern for which the tiger is recognized. A striped domestic shorthaired cat named “Scrapmetal” and a Bengal named “Millwood Rumpled Spotskin” served as the foundation stock for the Toyger breed, with Sugden adding “Jammu Blu,” a stray cat from Kashmir, India, with spotted markings between the ears, to the mix in 1993. Along with breeders Anthony Hutcherson and Alice McKee, Sugden’s work helped advance the Toyger breed to be accepted by The International Cat Association (TICA) in 1993 before gaining full recognition in 2007.