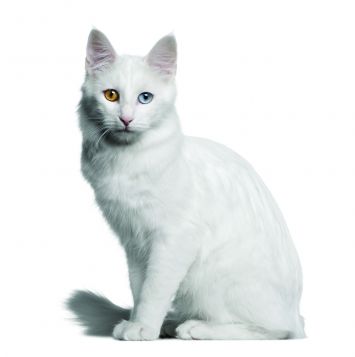 A balanced, graceful cat with a fine, silky coat that shimmers with every movement, in contrast to the firm, long muscular body beneath it.

Angoras seem to invoke strong responses in their humans with their symmetry, intelligence, and devotion. Angoras bond with their owners completely; an Angora is not happy unless they are right in the middle of whatever you’re doing. They enjoy a good conversation and can keep up their end of the discussion with the best of them.

Angoras are good-natured, but determined. Once an Angora gets an idea into their head, you might as well just give in and spare yourself the lengthy argument. Angoras have a great need to play and enjoy playing a good-natured joke on their favorite humans every now and then. They love practicing their pounce, on scraps of paper or unsuspecting human toes, whatever catches their fancy.

When in movement, which is most of the time, Angoras seem to flow with the grace of dancers. Highly intelligent, Angoras are problem solvers that like to be in control of their surroundings; they will only tolerate being held for a few minutes before jumping down to bat at sunbeams and chase feathers. They’ll stay in the room, though, so you can watch their antics admiringly. The Angora is known for its swimming prowess, and will even plunge in for an occasional swim. Not every Turkish Angora enjoys water, but some do, with varying degrees of enthusiasm.

No one is really sure how or where this ancient breed originated. Often recounted is the hypothesis that the Turkish Angora developed from the longhaired Pallas’s cat (Otocolobus manul), a small Asian wildcat about the size of the domestic, but this is doubtful. The Pallas’s cat has fundamental differences from the domestic feline and is unlikely to mate with domestics unless no other mates were available. Too, its differences would insure a number of generations of sterile males.

It is far more likely that the Turkish Angora developed from the African wildcat, like all other domestic cats. The recessive mutation for long hair in felines probably occurred as a spontaneous mutation centuries ago and was perpetuated through interbreeding in confined, mountainous areas that would limit outcrossing, such as regions in Turkey. The French naturalist De Buffon, writing in the later part of the 1700s, wrote that cats with long fur came from Asia Minor, a peninsula in southwestern Asia that forms the Asian part of Turkey. However they developed, longhaired cats have been noted in Turkey and the surrounding neighborhoods for centuries.

According to the legend, Mohammed (570–632 c.e.), founder of the Islamic faith, was so fond of cats that he once cut off his sleeve rather than disturb his beloved Angora Muezza, who was sleeping in his arms. Formerly called Ankara cats (the name of the Turkish capital was changed from Angora to Ankara in 1930), Ankara is also home to longhaired Angora rabbits and goats prized by the Turkish people for their long, fine hair. Longhaired cats were imported to Britain and France from Turkey, Persia, Russia, and Afghanistan as early as the late 1500s. The Angora had definitely found its way to Europe by the early 1600s, and by the late 1700s Angoras were being imported into America.

In the early days of the cat fancy, Angoras were highly prized. As the story goes, one Angora owner turned down an offer of ,000 for her favorite Angora at an 1890 cat show in London. Gradually, however, the Persian became the preferred type of cat in the European cat fancy. The Angora was used extensively in Persian breeding programs to add length and silkiness to the Persian coat. Later, the Governing Council of the Cat Fancy decided that all longhaired breeds should be simply called “longhairs.” Also confusing was the tendency of cat fanciers to call any longhair a Persian or Angora, regardless of its bloodline. Persians, Angoras, and Russian Longhairs were bred together indiscriminately. Except in their native land, Angoras ceased to exist as a pure breed. They stopped appearing in the show halls and from registration records. By the 1900s, Angoras had virtually vanished.

In the early 1900s, the government of Turkey in conjunction with the Ankara Zoo began a meticulous breeding program to protect and preserve the pure white Angora cats with blue and amber eyes, a program that continues today. The zoo particularly prized the odd-eyed Angoras (cats with eyes of differing colors), because they are believed to be touched by Allah. Mohammed’s Angora, Muezza, was believed to be an odd-eyed cat. Because the Turkish people valued the cats so highly, obtaining Angoras was very difficult, but in 1962 Liesa F. Grant, wife of Army Colonel Walter Grant who was stationed in Turkey, was successful in exporting a pair of the zoo’s Turkish Angoras to America, complete with certificates of ancestry. These imports revived interest in the breed, and soon other breeders began going through the difficult process of exporting Angoras, and developing the breed.

Medium size. Males may be slightly larger than females. Body is long and slender, possessing greater depth than width, oval rather than round (not tubular). Shoulders the same width as hips. Rump slightly higher than shoulders. Finely boned with firm muscularity.

Small to medium, in balance with the length of the body and extremities. Shape a medium long, smooth wedge. Nose medium in length. Neck slim, graceful, and rather long. Chin firm, gently rounded. Tip in profile to form perpendicular line with nose.

Large, wide at base, pointed and tuffed. Set closely together, high on the head, vertical and erect.

Large, almond shaped, slanting slightly upward with open expression. Each eye color can include much variation within defined spectrum. Turkish Angora eye colors include blue, sky blue to sapphire; green, gooseberry to emerald; green-gold, gold or amber eye that carries greenish cast or ring; amber, gold to rich copper but no green cast or ring; odd eyed, with one blue eye and the other green, green-gold, or amber.

Long and tapering from a wide base to a narrow end, with a full brush.

Single coated. Length of body coat varies, but tail and ruff are typically long, full, finely textured, and have a silk-like sheen. “Britches” are apparent on the hind legs.

Chocolate, lavender, the Himalayan pattern, or these combinations with white.