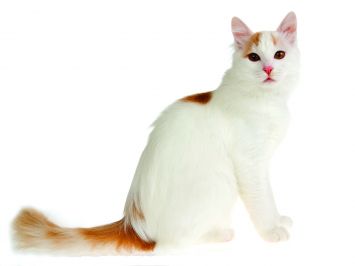 The Turkish Van is a natural breed from the rugged, remote, and climatically varied region of the Middle East. The breed is known for its unique, distinctive pattern; the term “Van” has been adopted by a variety of breeds to describe white cats with colored head and tail markings. The Turkish Van is a solidly built, semi-longhaired cat with great breadth to the chest. The strength and power of the cat is evidenced in its substantial body and legs. This breed takes a full 3 to 5 years to reach full maturity and development.

While you might be drawn to the Van for its fascination with water, you’ll fall in love with this cat for its other qualities. Vans are energetic, agile, and intelligent. They are extremely healthy and “get along with people swimmingly,” notes one Van owner.

You may need a few months of working out to keep up with them, however; Vans are famous for their action-packed temperaments. They are talkative, demand attention from their humans, and show great gusto at dinnertime. Vans are known for their deep attachment to their preferred people, and sometimes that makes transferring a Van from one household to another difficult. They tend to pick out one or two people in the household, usually the ones who deal with them initially, and bond with them forever.

Cat water fountains are a big hit with the Van; sometimes they’ll sit in front of the fountain and stare in fascination for hours at the trickling water. Many Turkish Van cats enjoy a dip in the pool, bathtub, sink, in a pinch even the toilet. Van owners quickly learn to keep the lid down, and must be careful about allowing unsupervised access to water. Turkish Van kittens can get into particular trouble with this fascination. Even Vans that don’t enjoy swimming are still fascinated by water, and will dunk their toys in water dishes and play in dripping faucets. Some will even learn to turn on faucets; they are very intelligent cats.

When the Ark arrived at Mount Ararat some 5,000 years ago, Noah must have been a bit busy keeping the animals from stampeding in their eagerness to touch dry land. In the hustle and bustle, Noah didn’t notice when two white-andred cats leapt into the water and swam ashore. When the flood waters receded, the cats set out for Lake Van, located about 75 miles (121 km) to the south of Mount Ararat, where they have lived ever since. At least, that’s one charming legend about the appearance of the Turkish Van, an ancient breed that has inhabited the Lake Van region of Turkey for Heaven knows how long.

Turkish Vans can also be found in the nearby areas of Armenia, Syria, Iran, Iraq, and areas of Russia. The history of this magnificently tailed swimming cat is at least as intriguing as the legends. Also called the Swimming Cat, the Van is known for its fascination with water. The likely explanation for the Van’s interest in swimming lies in the extreme temperatures in its native region. No kind and gentle environment here; Lake Van, the largest lake in Turkey and one of the highest lakes in the world, knows extreme temperatures in both summer and winter. Since summer temperatures reach well above 100°F (37.8°C), the Van may have learned to swim to cool off. Or perhaps the breed was hunting herring, the only fish that can survive in the briny water of Lake Van. Whatever the reason for the Van’s tolerance of water, it probably explains the development of the cashmere-like, water-repellant coat.

Most domestic cats hate getting wet, possibly because they must spend hours putting their fur back in order. The Turkish Van’s cashmere-like coat is water resistant, allowing the cat to go dog-paddling and come out relatively dry. No one knows for sure when the Turkish Van arrived in the Lake Van region or where they came from. Although a relative newcomer to North America, this Turkish breed has lived in the Van region for thousands of years. Native ornaments dating as far back as 5000 b.c.e. depict cats that look remarkably like the Turkish Van. If so, the Van could well be one of the oldest cat breeds still in existence. Vans were reportedly first brought to Europe by soldiers returning from the Crusades some time between 1095 and 1272 c.e. Over the centuries, the Vans were transported throughout the Eastern continents by invaders, traders, and explorers.

The Vans have been called by a variety of names: Eastern Cat, Turkish, Ringtail Cat, and Russian Longhair. Being cats, Vans probably didn’t answer to any of them. The modern and better-known history of the Van began in 1955 when British citizens Laura Lushington and Sonia Halliday were given two Van kittens while touring Turkey. Since the breed was not known in Britain at the time, they decided to work with the cats and try to get them recognized by the Governing Council of the Cat Fancy (GCCF). English breeder Lydia Russell was also instrumental in acquainting the public to the Van breed and sparking interest from fanciers in Great Britain and Europe. Russell also assisted new breeders obtain Turkish Van breeding stock. At first, the going was slow. Obtaining Van cats meant numerous trips to Turkey, and the cats had to pass through lengthy quarantine periods to enter England. Nevertheless, Vans were found to breed true, and in 1969 the hard work paid off when the Turkish Van was given full pedigree status by The Governing Council of the Cat Fancy (GCCF).

In addition to GCCF, the Turkish Van is accepted by the Fédération Internationale Féline (FIFe), Cat Aficionado Association (CAA) of China, and the Australia Cat Federation (ACF). The first Van kittens arrived in America in the 1970s, but it was not until breeders Barbara and Jack Reark started working with the breed in 1983 that the Vans began to flourish in North America. In 1985, TICA granted the Turkish Van championship status. CFA accepted the breed for registration in 1988, and in May 1993 the Van achieved provisional status with CFA, and championship status in May 1994. Even though the breed is still rare, interest has slowly grown. Until the 1980s, Turkish Vans were not officially recognized in Turkey although highly prized as pets by the Turkish people. Today the Vans are being preserved by the Turkish College of Agriculture in connection with the Ankara Zoo, the longtime breeder of the Angora. Vans are no longer permitted to be exported from Turkey, and most new Turkish Vans come from Europe.

Moderately long, sturdy, broad, muscular, and deep-chested. Mature males exhibit marked muscular development in the neck and shoulders. The shoulders should be at least as broad as the head, and flow into the well-rounded ribcage and then into a muscular hip and pelvic area.

Substantially broad wedge, with gentle contours and a medium length nose to harmonize with the large muscular body. Prominent cheekbones. In profile, the nose has a slight dip below eye level marked by a change in the direction the hair lays. Firm chin in a straight line with the nose and upper lip; rounded muzzle.

Moderately large, in proportion to the body, set fairly high and well apart; the inside edge of the ear is slightly angled to the outside with the outside edge fairly straight but not necessarily in line with the side of the face; wide at the base. Tips are slightly rounded.

Moderately large, a rounded aperture slightly drawn out at the corners, set at a slant, equidistant from the outside base of the ear to the tip of the nose. Eyes are clear, alert, and expressive.

Moderately long, muscular legs. They are set wide apart and taper to rounded moderately large feet. Legs and feet should be in proportion to the body. Toes, five in front, four behind.

Long, but in proportion to the body, with a brush appearance. Tail hair length is keeping with the semi-long coat length.

Semi-long with a cashmere-like texture; soft to the roots with no trace of undercoat. Due to the extremes in climate of their native region, the breed carries two distinctive coat lengths. The summer coat is short, conveying the appearance of a shorthair; the winter coat is substantially longer and thicker. There is feathering on the ears, legs, feet, and belly. Facial fur is short. A frontal neck ruff and full brush tail become more pronounced with age.