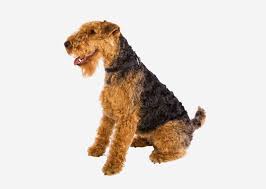 This is a square-proportioned, compact, sturdy dog of medium size, capable of running at good speed for distances. Their gait is free and effortless, with good reach and drive. Their coat is double, with a short, soft undercoat for insulation and a hard, dense, wiry outer coat for protection. Their expression and demeanor are oftentimes confident and alert.

One of only two terriers native to Wales, the Welsh Terrier probably descended from the old Black and Tan Rough Terrier that was popular in Britain in the eighteenth and nineteenth centuries. By the late 1700s, a distinctive breed—known as Ynysfor—was running with Otterhounds in North Wales. At the same time, a similar dog, the “Old English Broken Haired” Terrier, was popular in northern England. The two breeds were so similar that when they began to be shown, the same dog could compete successfully as either breed, and they were classified together.

Eventually, they all became known as Welsh Terriers, regardless of their origin. After all, both breeds had shared similar backgrounds and had been used to hunt otter, fox, and badger. In 1886, the English Kennel Club recognized the breed. From there, some sought to improve the Welsh Terrier by mixing in other breeds and their characteristics. The result was a dog that in some ways resembles a miniature Airedale Terrier. However, they never have attained the popularity that similar small, long-legged terriers have achieved.

The Welsh Terrier although more mild-mannered than many terriers, is still playful and mischievous enough to provide plenty of entertainment and challenges, and they are calm enough to be a well-mannered member of the family. They are often independent, inquisitive, and sensitive, reserved with strangers, and possibly assertive with other dogs and pets. They need daily exercise in a safe area, like a fenced yard. They may be independent or a bit stubborn. They tend to dig and bark.

The Welsh Terrier needs a moderate walk on leash every day or an invigorating play session. Their coat does not shed. Their wiry jacket needs combing two to three times weekly, plus professional grooming every three months.  Clipping softens their coat texture and alters their color.