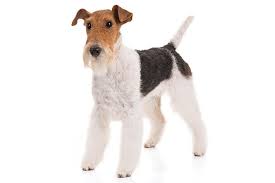 The Wire Fox Terrier is short backed and square proportioned, but at the same time standing over a lot of ground. They are known for their speed, endurance, and power. The gait while trotting gets most of its propulsion from the rear quarters. The expression, like the attitude, is keen; the carriage is alert and expectant. The coat is dense, wiry, broken, and twisted, almost appearing like coconut matting, with a short, fine undercoat.

The ultimate show dog, the Wire Fox Terrier has its roots as an effective hunting dog. The breed’s forebears were adept at bolting and perhaps dispatching game, especially fox, that had gone to ground.

Some speculation exists that the Smooth and Wire Fox Terriers arose from distinct backgrounds, with the Wire descending from the rough-coated Black and Tan Terrier of Wales. The Wire entered the show ring about 15 to 20 years after the Smooth made its debut. The two varieties were interbred extensively at one time, mainly with the objective of improving the Wire variety by decreasing its size, increasing the amount of white on its coat, and imparting a sleeker outline. This objective was met quite early.

A true “live-wire,” the Wire Fox Terrier is always up for adventure. This breed lives to play, explore, run, hike, and chase. They can be mischievous and independent and may dig and bark. They are usually fairly reserved with strangers. The Wire has a reputation for being somewhat scrappier with other dogs when compared to the Smooth.

The Fox Terrier must have daily exercise. They will do much to exercise themselves given the room, but they benefit from a good walk on leash, a vigorous play session, or an off-lead outing in a safe area. The Wire’s coat needs combing two or three times weekly, plus shaping every three months.