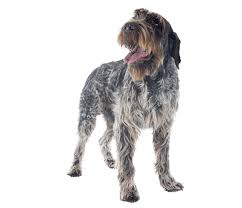 This strong breed can do well with any terrain. They are often slightly longer than tall, and of medium build. They functioned as both a retriever and pointer, and their size and build  reflects this. Their gait is efficient with low, catlike strides. Their coat is of medium length, straight and wiry, with a fine, downy, thick undercoat. This combination provides protection in the swampy country in which they originated, as well as insulation from cold and water. Their abundant facial furnishings contribute to their friendly expression.

Unlike the origin of most breeds, the beginnings of the Wirehaired Pointing Griffon were deliberate and fairly well documented, starting in the middle 1800s with the Cherville Griffon, who was subsequently mixed with the setter and pointer. It was Edward Korthals of Holland, however, who is credited with promoting and refining the breed. In fact, the Griffon is still known as the Korthals Griffon throughout most of the world.

He began his mission in 1874, mixing twenty dogs across seven breeds (griffons, spaniels, water spaniels, German and French pointers, and setter). Korthals traveled extensively in France and popularized his new breed wherever he went, whether it was a field activity, bench show, or business meeting. Through his French connections, this new breed became adopted in France, where they gained a reputation as a deliberate, careful hunter with a good nose. It was in France that the Wirehaired Pointing Griffon breed found a stronghold, causing people to consider them as a French breed despite their Dutch roots.

By 1887, the breed type was stable, and a breed standard was published. The first show classes for the breed were offered in 1888 in England, although at that time they were referred to as a Russian Setter or Retriever (apparently any well-furred dog was assumed to be of Siberian origin). In fact, the first Wirehaired Pointing Griffon registered in America was registered as a Russian Setter in 1887.

Their popularity grew steadily, only to be halted by the Second World War. Despite their low numbers, the Wirehaired Pointing Griffon has loyal fans who value their excellent abilities not only as a pointer and retriever but also as a loyal companion.

The Wirehaired Pointing Griffon is a skilled dog, often pointing and retrieving with a deliberate style. They combine independent action with amenability. They are a loving member of the family, devoted, willing to please, amiable, and even comical. They are generally friendly toward strangers, other dogs, and pets.

The Wirehaired Pointing Griffon needs daily exercise, either in the form of jogging, games, or a run. They may particularly enjoy swimming. Their coat needs combing or brushing once or twice a week, and professional grooming twice a year. Their ears usually need regular cleaning and sometimes removal of hair within the canal in order to avoid ear problems.