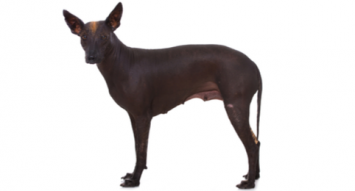 The Xoloitzcuintli combines grace and strength equally and is moderate in all aspects of their appearance. All three sizes are slightly longer than tall, and they are lean and sturdy with medium build. Their gait is effortless with good reach and drive. Their coated variety has a short, flat coat. The hairless variety has no coat or almost no coat, often with short, coarse hair on the top of their head, their feet, and the last third of their tail. Their skin is tough and protective. Hairless dogs feel warmer to the touch than coated ones, but they have the same body temperature. This warmth may have helped people think they could cure ailments.

HEAT SENSITIVITY 1 out of 5

Clay statues of dogs resembling today’s Xoloitzcuintli were interred in Mayan, Colima, and Aztec burial sites dating back 3,000 years. These dogs were believed to guide souls through the underworld. Aztec mythology asserted that Xolotl, the Aztec god of lightning and death, made the Xoloitzcuintli (pronounced show-low-eet-SQUINT-lee) from the “bone of life,” imparting physical and spiritual healing power to the dogs. The name combines Xolotl with “itzcuintli,” Aztec for “dog.”

These dogs were found throughout Mexico and parts of Central and South America safeguarding against spirits and intruders and healing people. The hairless dogs were first described by Columbus in his 1492 journal. After the Spanish Conquest, Xolos (their short name) were almost lost, surviving mostly in remote areas. In 1887, the AKC registered the breed as the Mexican Hairless, but their numbers remained low and they were dropped from the ranks in 1959—the only breed ever dropped from the roster. Meanwhile, in 1953, several British and Mexican dog authorities, realizing the breed’s tenuous existence, searched remote Mexico and returned with ten Xoloitzcuintli. In 1956, the breed was named the official dog of Mexico. From there, this breed started to become more well known.

As a primitive breed, Xoloitzcuintli may be somewhat independent natured. They do like to please, but they’re also independent thinkers. They tend to be calm but inquisitive, devoted but not fawning, self-assured but not overly trusting of strangers. They get along fairly well with other dogs and pets. They are alert watchdogs in the home and will alert their family to visitors or strangers, however they are typically not excessive barkers. Some can be escape artists.